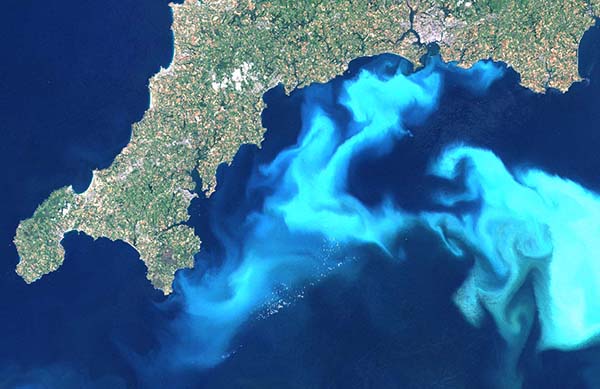 Aquatic dead zones in oceans are usually caused by excessive nitrogen and phosphorus pollution, a condition called eutrophication. These elements are fundamental nutrients of certain phytoplankton (single-celled algae). Typically, the proper balance of these elements limits algal growth. However, excess nitrogen and phosphorus leads to explosive growth of phytoplankton in “algal blooms,” which can be so large they can be visible from space, as green drifting shapes. They can also be yellow, brown, or red, depending on the species. Bacteria then feast on the phytoplankton and consume oxygen, leaving little oxygen for the survival of other marine life. 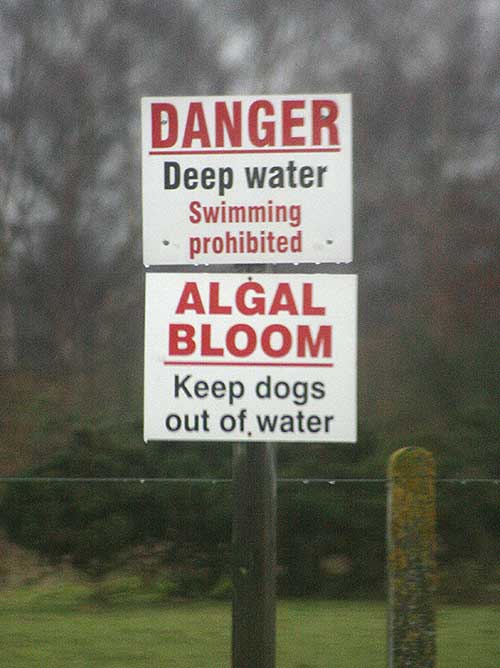 The blooms are also toxic for humans. Senator James Inhofe became ill in 2011 after swimming in a lake with a toxic bloom, triggered by unusual summer heat. Toxins can become airborne, causing asthma. In August 2014, a toxic bloom in Lake Erie shut down Toledo, Ohio’s water supply system, which serves 500,000 people. 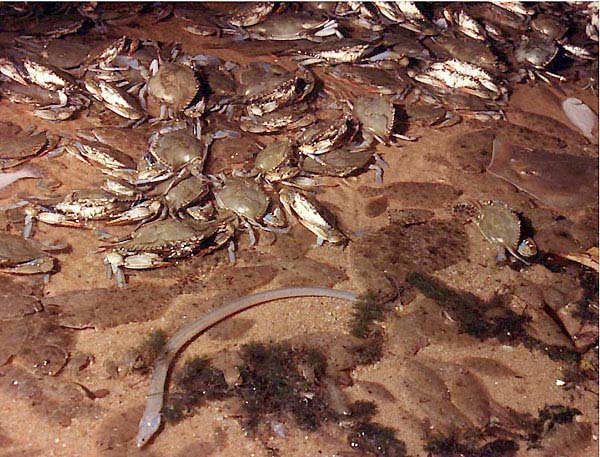 Jubilees have typically been naturally occurring low-oxygen sea events similar to dead zones. Rather than killing the fish, however, they cause marine life such as flounder, eels, and crabs to flee by the droves onto the shore, gasping for oxygen. Jubilees are celebrated events and attract large crowds, drawn by easy-to-catch seafood.

Naturally-caused jubilees occur in summer months when bacteria feed on large masses of decomposing plant matter that accumulate in the water, which depletes the oxygen. They used to occur in only a few places, especially Mobile Bay, Alabama. However, jubilees now occur elsewhere, triggered by nitrogen and phosphorus pollution. These events are not causes for celebration but for concern and action.

Sizable dead zones appear along US coasts and in inland waterways. The dead zone off the Louisiana coast in 2014 was about the size of Connecticut. A 2008 study counted 405 dead zones worldwide—about half are in the US. The number has doubled every decade.

The economic impact of dead zones is enormous, costing billions of dollars in diminished tourism and fishing yield. In 1997, fear of the toxins essentially shut down Maryland’s $400 million seafood industry for several months.

Dead zones can be reversed if nitrogen and phosphorus inputs are reduced through the policies and incentives that transform our agricultural system and phase out the burning of fossil fuels.

Organic farming doesn't use extreme-nitrogen fertilizers, but instead uses cover crops to “fix” or introduce nitrogen in the soil. Long-term research at Rodale Institute shows that properly managed cover crops (legumes, grains, grasses or mixtures) can provide all the nitrogen crops need. Farmers could be given incentives for conserving nitrogen and building organic material in soil. Crop rotation and no- or low-till practices reduce soil erosion and runoff. Transitioning from factory farms to pasture-based livestock and composting manure are also important mitigation strategies.

Corn is the most chemical-hungry crop, using nearly half of nitrogen and phosphorous fertilizer in the US. Ending the government subsidized corn ethanol program—which consumes 40 percent of that corn with no net energy benefit—is also essential.