As carbon dioxide levels increase in our atmosphere, our oceans absorb almost a third of carbon emissions. The excess CO2 changes the water’s chemistry through a process called acidification.

Over the past decade, rising seawater acidity on the Northwest coast has hit young oysters hard. This is an early warning signal of trouble. In turmoil over the losses, the coast’s $84 million oyster industry has worked closely with scientists to determine the causes.

PH levels have always varied seasonally in the coastal waters. But scientists found that human-caused increases in CO2 are shifting the overall pattern towards more acidity, sometimes causing the water to be more acidic than the tiny, delicate baby oysters can endure. Researchers looked at all the possible explanations for the oyster deaths: other pollutants, local factors, sewage treatment, logging, lack of oxygen, or temperature shifts. They ruled out all other possibilities, finding that the shift in acidity—primarily from the burning of fossil fuels—is the culprit.

Oyster growers are finding ways to cope with the situation. But they realize these are stopgap measures that won’t last forever and have become early vocal advocates for addressing the pH issue at its source, by cutting carbon emissions.

Carbon dioxide combines with seawater to produce carbonic acid, which increases the acidity of the water, lowering its pH. The acidity of the ocean has increased by over 25 percent since before the Industrial Revolution when humanity started burning fossil fuels. Previously, the oceans were in relative balance with the atmosphere, absorbing about the same amount of CO2 each year as they released. If current trends continue, ocean CO2 levels could double by the end of this century, exceeding the levels of the past 20 million years.

A grave consequence of increasing ocean acidity is a reduction in the amount of calcium carbonate available for use by shell-forming marine animals including corals, oysters, shrimp, crab, lobster, and the shells of some marine plankton, severely impacting the ability of these creatures to create their protective structures. Furthermore, acidic water can become so corrosive that it will dissolve their shells and skeletons directly. Colder water absorbs higher levels of CO2 than warmer water, and West Coast seas are already so acidic that this is occurring (see photo below: Pteropods).

Coral reefs are already showing significant stress from acidification, warming, and other factors, resulting in "coral bleaching,” an often fatal condition. Nearly 30 percent of the world's tropical corals have vanished since 1980. At the current rate of emissions increase, tropical corals could be gone by the middle to the end of this century. Coral reefs—the “rainforest of the sea”—provide habitat for at least a quarter of all marine species, many of which will face extinction if reefs disappear. The effects will ripple through ecosystems and food webs, ultimately affecting even the largest marine animals and commercial fisheries. This would cost society billions of dollars annually due to losses of fishing, tourism, and coastal protection. It would also jeopardize an estimated half billion people who depend on coral reefs for their daily food and income. 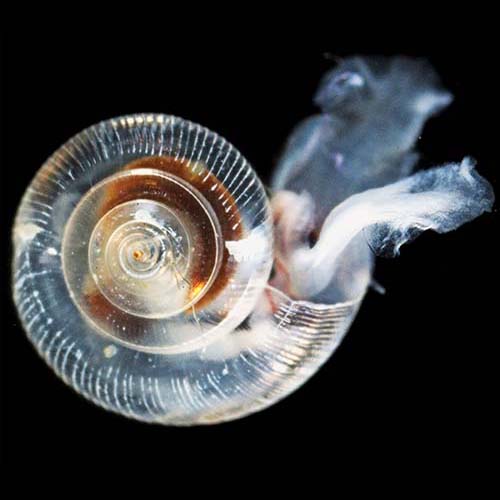 Pteropods are tiny delicate snails that use their feet as wings to “fly” through the sea. They are a “keystone species,”—a crucial food source for organisms ranging from small fish to whales. They comprise up to 60 percent of the diet for young pink salmon. West Coast pteropods are already affected by acidification. In a study conducted by NOAA's Northwest Fisheries Science Center pteropods are shown after living in acidified surface (top) or normal water (bottom) for six days. The white lines depict shell dissolution and reflect why ocean acidification is referred to as "osteoporosis of the sea.“

While fish don't have shells, they still feel the effects of acidification. Fish are also sensitive to pH and must to put their bodies into overdrive to normalize their chemistry. They must burn extra energy to excrete excess acid from their blood through gills, kidneys, and intestines. This reduces their energy for taking care everything else: digesting food, escaping predators, catching food, reproduction, and growth.

As another impact, acidification make it harder for phytoplankton to absorb nutrients, and without nutrients they are more likely to succumb to disease and toxins. These toxins then concentrate in the zooplankton, shellfish, and other marine species that graze on phytoplankton. Phytoplankton are a critical part of our planetary life support system, sitting at the bottom of the ocean’s food chain. They produce over half the oxygen we breathe! They also reduce atmospheric CO2, and ultimately support all fishes.

As the oceans continue to absorb CO2, their capacity as a carbon storehouse will diminish. More of the CO2 we emit will remain in the atmosphere and increase the climate crisis.

Important new research shows that if we continue to dump carbon dioxide into the atmosphere, it would still acidify our oceans, poisoning marine life—even if down the road we could sequester it from atmosphere. The CO2 would still remain in our oceans, poisoning marine living systems (explained here and here). Only dramatic emission reductions—starting now—will save the oceans' living systems.

While acidification alone could kill our ocean ecosystems—and dead oceans would mean no us—warming, deoxygenation, aquatic dead zones, and plastics pollution also put our oceans on a lethal pathway. About 80 percent of the heat generated by greenhouse gases is absorbed by the seas, mitigating much of the atmospheric temperature increases that would otherwise occur, but this heat comes at a great price to ocean life, especially to coral reefs. We simply must change course if our oceans are to regenerate and stabilize.

Smithsonian, Lesson Plan, “Off Base,” http://ocean.si.edu/for-educators/lessons/base