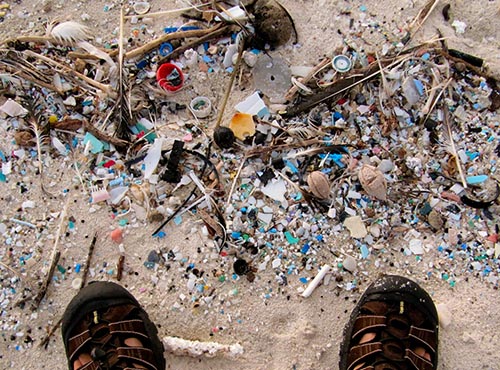 Plastics are accumulating in our seas, much to the detriment of marine life.

Our modern lives are awash in plastic products, made from oil and natural gas. Eight percent of the world’s oil production goes towards the production of plastic. In the past decade, we produced more plastic than during the entire twentieth century.

Discarded plastic is now found floating in massive garbage patches in our oceans, ultimately gathered in five major “gyres” which are slowly spinning current vortexes in the Pacific, Atlantic, and Indian Oceans. The North Pacific Gyre spans an area larger than Texas. As much as 5 - 13 million tons flow into the sea every year.

Plastic is designed to last, yet we routinely throw it away. We only recycle nine percent of plastics made, and about half ends up in landfills. Must of the rest is “unaccounted for”—whether it is tossed away as litter or blows out of disposal bins, it can wash down streams, rivers, and ultimately into the sea. Land-based waste accounts for up to eighty percent of the problem. The remainder comes from various water-based activities.

A recent study (using data from twenty-four global sea expeditions over six years) estimated there are 5.25 trillion particles of plastic litter in our oceans, weighing 269,000 tons. This amounts to 700 pieces per human on earth. This study only observed floating plastics. It did not account for the potentially massive amount of plastic present on shorelines, on the seabed, suspended in the waters, and within organisms.

Some pieces remain intact for decades. However, brittle micro-plastics break up into ever-smaller bits. New research shows that particles smaller than 4.75 mm (about 3/16 inch) appear to be lost from the sea surface. Explanations include further breakdown by sun and waves, ingestion by organisms, decreased buoyancy, settling, and beaching. 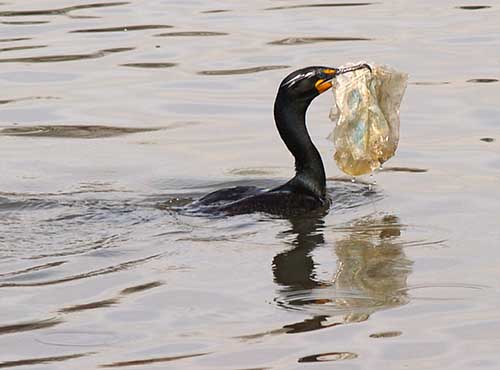 Plastics are blocking the digestion of birds, fish, and turtles. Micro-plastic particles are consumed by small organisms, and are working their way up the marine food chain.

This invasion of plastics in the oceans creates a nightmare for fish, sea birds, and other marine life. Discarded fishing nets and floats fatally entangle dolphins, sea turtles, and other creatures. Marine animals mistake plastic bits for food, and fragments lodge in their throats and digestive tracts. This blocks their digestive tracts and makes them unable to eat real food, often causing slow starvation. Forty-four percent of seabird species have ingested plastic. In 2004, it was estimated that seagulls in the North Sea had an average of thirty pieces of plastic in their stomachs. Autopsies of 370 Pacific leatherback sea turtle found that a third had plastic in their stomach.

Very few plastics are designed to biodegrade. Even when plastic breaks down to molecular sizes, it remains plastic. Furthermore, some forms of plastic leach chemicals such as bisphenol A (BPA) and derivatives of polystyrene into the seawater, creating a toxic soup. BPA interferes with the reproductive systems of animals, while styrene monomer is a suspected carcinogen. The pollutants are denser in areas heavily littered with plastic debris.

What's more, plastic particles can become coated with toxins and other pollutants, making ingestion even more damaging. As such particles are eaten, the toxins are absorbed into the marine food chain. Pollutants become more concentrated as animals eat contaminated prey. And what goes around comes around. Our waste, toxic for the ocean’s web of life, is toxic for us humans. It comes full circle and ends up in us, too—the animals at the top of the food chain.

First of all, plastics cannot be harvested from oceans—it would be costly, inefficient, and would likely also harvest the smallest sea organisms. Even if possible, the cost would be astronomical.

We must deal with this problem at its source—by cutting back our profligate use of plastic packaging and our consumerism, and by improving our waste disposal. We must demand zero tolerance for plastic pollution. Support legislative efforts to manage waste. Plastic bags are especially common and problematic. California passed a statewide ban on single-use plastic bags—building on the success of nearly 100 California municipal bans. Yet we must go much further than just banning plastic bags.

Biodegradable plastics—bioplastics—are an incomplete solution. They mostly rely on potential food crops for production, and are not always truly biodegradable. They can take decades to degrade, and some release methane, a powerful greenhouse gas. They may even encourage a “litter friendly” mentality.

A redesign of food and product packaging is paramount; fundamentally, the creation of a “circular economy,” one in which products are designed with end-of-life recovery, is required. A “precycling” premium would encourage such a reorientation. A “zero waste” strategy would encompass ecodesign, waste reduction, reuse, and recycling, as well as producer responsibility.

Curtailing our consumption and production of petroleum-based plastic waste, and choosing cost-effective alternatives will go a long way towards protecting our seas, and ultimately our own health.

Film trailer: “Midway.” On one of the most remote islands in the world, photographer Chris Jordan documents the plight of albatrosses whose bodies are filled with plastic from the Pacific Garbage Patch. http://www.midwayfilm.com/