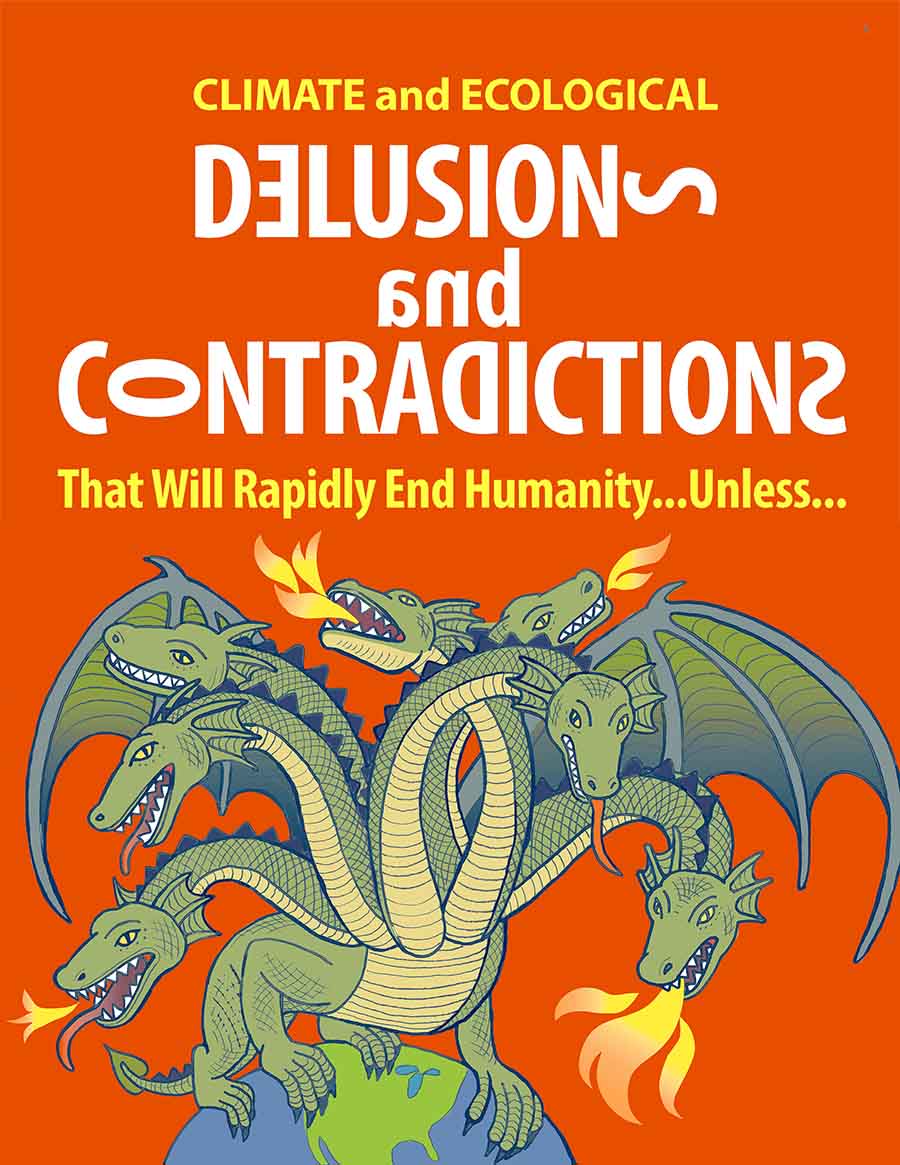 Learn about the “Hydra-Headed Delusion Dragon” that has the world caught in its spell, and how we can combat its multi-headed delusions and threats.

Delusions and Contradictions provides the basis for why we need to trigger a wide spread alarm and how we can achieve it.

The world is in a genuine climate and ecological emergency, yet this is not perceived, understood, or discussed. We must quickly get the emergency into the news cycle and conversation. The case is overwhelming for a Climate and Ecological Emergency Campaign as an overriding national priority. The aim is zero emissions within a decade in the US, feasible with an all-out mobilization—that is, a restructuring of our economy at rapid speed. Mobilization of our nation’s people, resources, and economy to slash our fossil fuel use is necessary for a viable future.

We must quickly drive an open, factual national conversation, to achieve a US consensus on this climate mobilization as quickly as possible. Public engagement must be galvanized through: (1) an extensive warning initiative, and (2) civil discourse gatherings so that Americans perceive the Realities facing all of us.

For climate stabilization well under 2°C, we must start now to reduce US greenhouse gas emissions by about 10 percent each year, until fossil fuel phase-out is complete in a decade, and globally in fifteen years, quickly transitioning from fossil fuels to low carbon energy.

To achieve this, several essential actions are now needed:

Enacting effective policies to facilitate this transition within a decade will, in effect, catalyze a culture-wide mobilization effort. The first step is to get the emergency situation into the cultural conversation, so the emergency is perceived, declared, and acted upon with an Emergency Climate Mobilization. This is the aim of the Climate Emergency Coalition.

The COVID crisis shows that humans can and do rise above fear and respond quickly. People have cooperated and sacrificed for the whole.

The climate movement has mistakenly believed that people would panic, become paralyzed, or fall into resignation if they understood the looming climate threat. The widespread notion that people panic in emergencies is not corroborated by evidence, research, or human behavior.

Research shows that we behave cooperatively and rapidly—even with extraordinary teamwork and collaboration—when trained or given accurate information about disasters and constructive response options. Emergency mode involves an intense focus of attention and resources on responding effectively to address the emergency.

So awakening citizens to the danger and providing responses that deal with the scope, scale and urgency of the crisis is necessary. If that is done effectively, we can expect constructive cooperation and mobilization to avert climate catastrophe.

Knowing what to do and preparing facilitates “eustress” (a positive form of stress) in emergencies. The seemingly impossible can be accomplished in extreme situations when emotion, purpose, and enthusiasm are combined.

Humans evolved in tribes, and group success was vital to the survival of each individual. Very importantly, it’s within our nature to work together in groups.

The type of emergency response needed in our situation is called mobilization.

What is mobilization?  Mobilization is a coming together as a people with a common cause—an emergency restructuring of a modern industrial economy. It involves everyone and impacts all areas of society—a comprehensive societal and industrial metamorphosis.

Mobilization summons a sense of collective destiny and moral purpose. Importantly, mobilization is not a blind use of government control. Rather, this is a particular strategy that guides the economy away from petro-consumerism towards a complete fossil fuels phase-out and transformation to a zero-carbon society.

We are calling for a society-wide Emergency Climate Mobilization aiming to achieve zero carbon emissions in the US within a decade and globally in fifteen years. We see this as the fastest possible phase-out of fossil fuels in a “long emergency” mobilization mode, in which we can achieve far more than what is now commonly thought as possible.

Beyond the Alarm and Awakening

Although the nature of comprehensive change will encourage people to work individually / locally, it is critical to understand that without the national and international-level response, local / state level actions will not make enough difference by themselves to salvage a viable future and viable humanity into the 22nd century.

Similarly, local practices are actually futile without broadcasting positive local strategies, and without being able to access “best practices toward livability and future viability.” Therefore, after a national / international alarm and awakening, the positive action steps taken in innumerable local / state systems must be broadcast universally so that best practices can be emulated and spread.

[1] As Kevin Anderson, professor of energy and climate change at the University of Manchester notes, this fundamentally rewrites the chronology of climate change from long-term gradual to urgent and radical, "Reframing Climate Change: How recent emission trends & the latest science change the debate." David Roberts notes the “brutal logic” of climate change  .

[2] Emissions reductions must occur sooner in developed nations, given our historical contribution to the problem and our capacity to innovate and remediate.