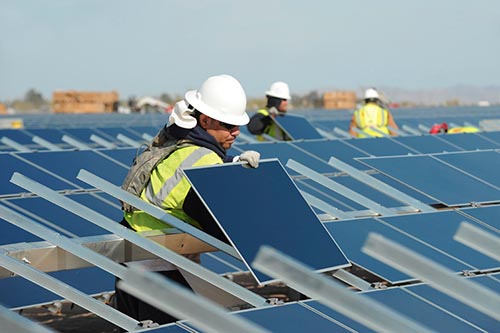 One Step toward Carbon Sanity is to Price or Tax Carbon.

A price on carbon fuels commensurate with their threat level to the environment is one step to plausibly reduce fossil fuel consumption. However, the discussion about pricing, or “internalizing costs,” has been delayed so long that taxes on carbon would have to be extremely high to lead to a rapid phase-out of fossil fuels.

That phase-out is necessary for reasonable climate stability.

Unfortunately, in 2018 and beyond, carbon pricing would need to be in the area of $100-$200 per-ton of CO2, and even that price could not be managed within the confines of an economic-growth-at-all-costs policy approach. Effective carbon pricing as discussed by economists and climate stabilization advocates is not being even being proposed at anything like >$100/ton CO2, and nothing at all is even being considered at the national level.

Emissions reductions needed now to stabilize climate at levels where a livable future is likely, must be so deep and consistent that policies leading to direct reductions, rather than trying to lower emissions through taxation is a more sensible approach.

To be clear however, CEC favored a Fee-and-Dividend approach when it was proposed at the very beginning of the Obama Administration, however it is too late to focus on that idea which has passed its effective date for implementation. Since that time some 400 billion tons of CO2e have been dumped into the atmosphere, almost half of the carbon budget remaining to hold to the Paris Agreement 2◦C warming ceiling.