Can This Unprecedented Administration Be "Un-Presidented" Too?

"Donald Trump and his band of Banana Republicans are turning our country into a banana republic."
– Swami Beyondananda

Is the honeymoon over yet?

Perhaps a better question is, what kind of honeymoon follows a shotgun wedding? For the past two months, I have explored how the failure of neoliberalism helped fuel the perfect storm that put Donald Trump in the White House, and how given the choice between status quo and disruptive change, the body politic chose the latter. 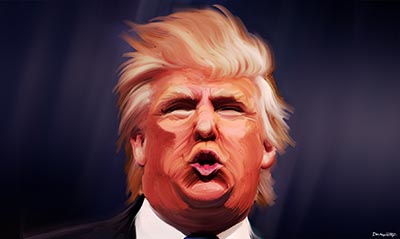 Long-term, we're looking at a new transpartisan movement that acknowledges what my colleagues Lawrence Chickering and James Turner write in Transpartisan Review:

If unrecognized, the transpartisan reality – that most Americans feel alienated from the current political process, even, or maybe especially, when controlled by an outsider like Trump –will impede action in every direction. The transpartisan vision-including the widest possible expression of interests in all decision-making-needs support from both inside and outside our formal governmental institutions as part of getting successfully through this contentious time.

That –  helping left and right come front and center to hold governance accountable to the standard we would all agree on, if we were "allowed" to have that conversation together –  is the focus of my work in coming months and years.

In the short run, we still have to deal with an administration reminiscent of the mythical bandit, Dooh Nibor, which is of course Robin Hood spelled backward, who steals from the poor and gives to the rich. For if anything is apparent in these first weeks of the Trump administration, it's that under the guise of "draining the swamp" and dismantling "big government", the current gang of kleptocrats are redistributing the commonwealth to the uncommonly wealthy.

And that doesn't even begin to deal with the lies, the bullying, the mismanagement, and the misbegotten policies to benefit "white wing" America, the war on the undocumented, the war on Muslims, and the war on reality itself.

Two weeks ago, my colleague Richard Lang suggested that we focus our attention on the White House petition site, where the petition demanding Trump release his taxes has grown from 100,000 to more than 600,000 signatures. In the ten days left before the petition is presented to the President, our goal is to go over a million.

First, there is reason to believe that release of his taxes will show financial ties with foreign governments, in violation of the Emoluments Clause, a treasonous and impeachable offense. While there are those who say, "So what? That will just give us President Pence," I suggest that de-legitimizing Trumpism will make Pence an impotent president at best, particularly after the 2018 mid-term elections.

There's another reason to focus and populate the WhiteHouse.gov petition site as well, and that is to demonstrate the power of a million people virtually gathering in one place at one time. A million may not mean much.  But when in the future 25 million or 50 million Americans show up in one place to voice their vote, the powers in power will have to listen.

Meanwhile, with the Muslim ban in the news, another friend and colleague, Kerry (Sathya) Benthall, has made this connection and posted it on his Facebook page:

Trump "Muslim" ban is his version of "Pay to Play".

Don't be misled by Trump's current "These 7 Muslim Countries are terrorists" ban. While he has everyone searching down legal arguments for and against the Executive Order, we're all missing the real agenda. This is Trump's version of "Pay me to Stay".

Remember during the election he constantly called Hillary and the Clinton Foundations "crooks" for their "pay to play" tactics.

If Trump were to reveal his tax returns, we'd all finally see what he's been hiding: billions in investments from all these countries.

So in effect Trump is just saying to these 7 countries "Pay me my tribute and I'll remove you from my 'ban' list."

Follow this link to sign the petition. It's important and it's actionable. Our signatures do count. Our vote and our voice matters. We don't have to feel helpless. We can take a stand and see the difference we make when we speak with a unified voice. More than 600,000 have signed and growing. Add your voice today!

As many are noting Donald Trump is probably doing more than Bernie Sanders to unite progressives. We will have ample opportunity to animate a vision and build a movement for the future.

Meanwhile, let's "strike while the irony is hot".  Let's gather at the petition site, tell all our friends and co-hearts, and let Mr. Trump and Ms. Conway know that we DO care if our president complies with the law. Here again is the petition site.

Our momentum will awaken and hearten others – including Republican legislators who've been reluctant to stand up to Trump until now.

And may we together create a new "precedent" of our own – government of the people, by the people, for the people, where the government does OUR bidding, not the bidding of the highest bidder.

Steve Bhaerman is the slightly-more-serious alter ego of cosmic comic Swami Beyondananda.  He is the author of seven books, most recently Spontaneous Evolution: Our Positive Future and a Way to Get There From Here with Bruce Lipton.  Steve has been writing the Notes From the Trail blog since 2006, and can be found online at http://www.wakeuplaughing.com/