Lessons for the Climate Crisis?*

We are out of time for any gradual phase-out of fossil fuels. We need an all-out Emergency Climate Mobilization to completely cut emissions within a decade. Is America’s World War 2 mobilization a good example for our situation? How can we create the “Pearl Harbor” urgency and society-wide response needed?

What Is Mobilization, Anyway?

Mobilization is a coming together as a people with a common cause--an emergency restructuring of a modern industrial economy, typically at rapid speed. It involves everyone and impacts all areas of society—a comprehensive societal and industrial metamorphosis.

Mobilization summons a sense of collective destiny and moral purpose. Importantly, mobilization is not a blind use of government control. Rather, this is a particular strategy that guides the economy away from petro-consumerism towards a fossil fuels phase-out.

THEN:  The Axis nations—Japan, Italy, and Germany—threatened world freedom, stability, and security in the late 1930s. For years, Americans denied this real peril, believing the US could somehow stay on the sidelines, even as Axis Powers invaded country after country. But the December 7, 1941 Japanese attack on Pearl Harbor shattered the United States’ denial. National sentiment flipped overnight from isolationism to mobilization. Most Americans then enthusiastically participated in a rapid transformation of the US economy and society.

NOW:  As before Pearl Harbor, Americans today are caught in denial and apathy, obstructing and delaying any response to our global emergency. We are still beholden to the “non-negotiable American way of life” that actually threatens our very survival. How to create a “Pearl Harbor moment”—to wake up Americans—remains the central burning question of the climate movement.

THEN:  The war munitions industry in the US was diminished after WW1. Upon our entry into WW2, the federal government both required and supported a rapid conversion from consumer to war production. For example, private auto manufacturing was completely halted in early 1942. By mid-year, nearly all major industries and some 200,000 companies had converted to war production, making the nation’s wartime “miracle” possible—shattering all previous levels of war production. Astonishing the world, it exceeded the combined production of the Axis powers and made all the difference between victory and defeat. Pressing even further, the government collaborated with scientists and with universities for breakthrough research that contributed to the war effort. 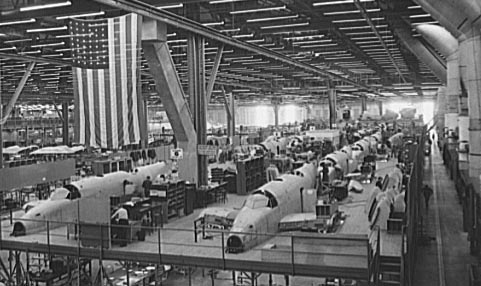 Lockheed Ventura bombers built for the Royal Air Force under construction at the Lockheed Vega division, Burbank, California (USA), in June 1941. The factory originally made explorer aircraft, but was converted for the war effort.

To combat climate change, we need a similar-scale mobilization of our culture.

NOW: We need a complete reorientation of our economy to facilitate a wartime-speed deployment of renewable energy, smart grid technology, electric-based transportation, mass transit, zero waste, retrofitted buildings, sustainable agriculture, and more. Industry must maximize efficiency and produce the post-carbon energy infrastructure—the “armaments” in the climate war. Funding for clean energy research must be stepped up more than 500%. Since we have postponed action for so many years, as with WW2 we must now exceed our expectations of what can be accomplished.

THEN:  Everybody helped. On the battle front, young men gave their lives. On the homefront, women surged into factories, and over 10% of the population relocated for a war job. People grew Victory Gardens that supplied 40% of America’s produce during the war. To channel maximum resources towards the war effort, the government called on citizens to invest in war bonds to help finance the war, to ration goods, and to use resources carefully. Communities held scrap drives to recycle goods like tin and rubber. The government imposed a speed limit of 35 mph, and outlawed pleasure driving and auto racing. People willingly sacrificed for the cause, and sacrifice was expected of everyone.

NOW:  As with WW2, we need the participation of all. Initially, we must enact policies that incentivize low-carbon choices, however, policies cannot accomplish all the needed changes. A metamorphosis of culture—from individual consumerism to cooperation and sacrifice—can only come through the public’s perception and understanding of our crisis, and through a transformative vision of a better, just world. As before, citizens must throw themselves into the collective effort. 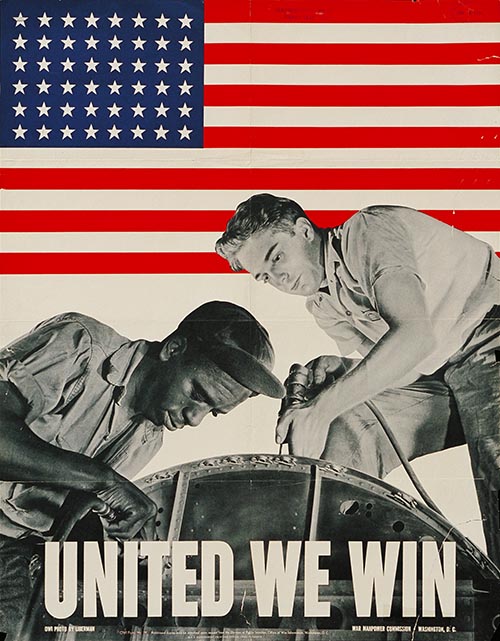 THEN:  Still a major issue since the Great Depression, unemployment rates were slashed from 14.6% to 1.4%, while wages grew 55%. Full employment, higher wages, and progressive taxation brought far greater income equality. The war effort also brought gains in social equality, especially for women and African Americans. Corporate profits boomed, however, profit-seeking was channeled towards the national mission. Government, not corporations, led the transformation.

NOW:  Transitioning from fossil fuels to clean energy will create many more net jobs. However, workers losing jobs in carbon-intensive sectors will need training and placement in the new economy. Climate mobilization will bring greater social and income equality, as did the WW2 mobilization. Corporations can no longer drive the agenda—the people and government must lead the way. This is our opportunity to create a just economy and a world that works for all.

THEN:  Defense spending rose from 1.4% of the Gross National Product in 1939, to 45% at the peak of the war effort in 1944. This was financed primarily through war bonds, excess corporate profit taxes, and raised income taxes, especially on the highest earners (their rate was 94% in 1944). 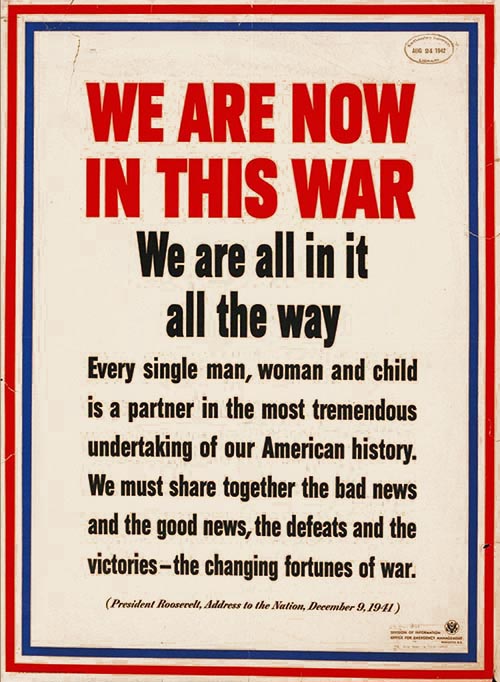 NOW:  Combating climate change will not be cheap, as some advocates claim, but it will be affordable with the right priorities and measures: (1) ending dinosaur government subsidies—such as for fossil fuels, corn biofuels, and non-sustainable agricultural practices, (2) cutting military spending, (3) ending corporate welfare, (4) reversing the immense transfer of wealth to the rich, and (5) ending fossil fuel externalities through a fair carbon tax that distributes revenue to citizens—to account for costs borne by society.

THEN:  Wartime agencies, given broad powers to plan and prioritize, guided the war effort. The mobilization required large-scale deficit spending, higher taxes and price controls to contain inflation, extensive regulations, and government control over the distribution of basic goods and raw materials. 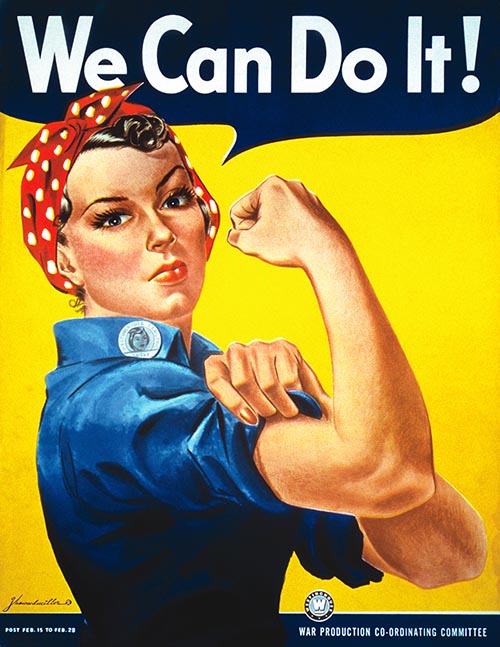 The WW2 mobilization provides an inspiring example of what is necessary and possible, given our best efforts. In less than four years, the US achieved the unimaginable: it fought and won a two-front war against two powerful military empires, forcing each to surrender unconditionally. For humanity’s survival, we must mount a similar heroic effort. In our two-front war on climate chaos, we must phase out fossil fuels within a decade, and draw down atmospheric carbon to safe levels.

Mobilization clashes with today’s dominant paradigms: corporatism, anti-government, deregulation, privatization, hyper-individual consumerism, perpetual economic growth no matter the cost, tax cuts, and diminishment of the public sphere. This neoliberal capitalism is trashing the planet, and its era must end before it ends us.

Yet it is hard to imagine the level of cooperation and revolutionary change needed now. So how can we create this complete mobilization, when the climate crisis has no clear, galvanizing “Pearl Harbor moment,” and the dominant worldview is completely opposite of what is needed?

The public must perceive that: (1) we must phase out fossil fuels as fast as humanly possible, not gradually over decades, which would cook us, (2) individual actions are insufficient—we need a collective, united mobilization to fight humanity’s common enemy, climate chaos, and (3) we can win this war and avert catastrophe.

A Climate Emergency Coalition Campaign with personal, face-to-face engagement and moral conversations in tens of thousands of faith and civic spaces across the nation may be necessary to awaken and galvanize citizens to change the cultural conversation and quickly generate the public will necessary to create such a society-wide Emergency Climate Mobilization. Additionally, the Climate Emergency Coalition supports groups and citizens calling for emergency mobilization.

Fear is empowering, when experienced in community and coupled with a vision of collective action for a better world. Moreover, we are not innately selfish; we are capable rising up with the needed response. It is time to face this existential threat to civilization and the natural world, and to use fear to spur us to responsible action.

Importantly, history has repeatedly demonstrated that culture can transform dramatically, especially in times of emergency. And it only takes 3-4% of the public to trigger that transformation.

*With appreciation for the work of The Climate Mobilization, for helping develop much of the thinking and comparison between World War 2 and what a climate mobilization might look like.